Daniel Horowitz has personally been lead counsel in over 200 jury trials.  He is a licensed Real Estate Broker and a licensed RIA (Registered Investment Advisor).  He has been SEC counsel for a brokerage firm that managed the voluntary pension fund for the Metropolitan Opera and the American Ballet Theater.

Daniel is certified by the State Bar of California as a criminal defense specialist a certification which requires peer review, judicial review and a written examination.  He represents physicians in business disputes and Medical Board matters and is a member of the California Society for Healthcare Attorneys.

Daniel is rated “10” by AVVO, has the highest Martindale Hubbell rating (AV), is a California “Super Lawyer” and has been inducted as a “Top 100 Lawyer” by the National Trial Lawyers.  He has been admitted to and filed briefs in, the United States Supreme Court, California Supreme Court and Ninth Circuit Court of Appeals. 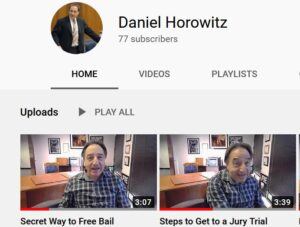